April 18th 1953 in Detroit Don Larsen made his Major League Debut going 5 and a third innings in a non decision game. Larsen would go 2-2 batting and the St Louis Browns would go on to win 8-7. Satchel Paige would pitch 2/3rds of an inning for the Browns. Don Larsen would go on to pitch the only Perfect Game in World Series history. This ticket is a one of one in the PSA population report and has been graded by PSA PR-1. Ticket has had some water damage which has caused the discoloring. Ticket shows nice! 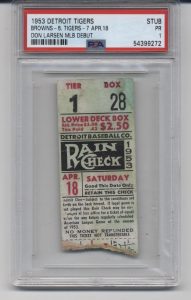 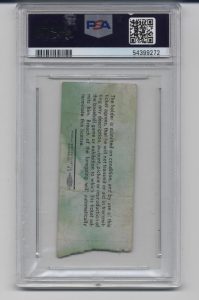